By July 2014 my coach was beginning to look...well, like a coach. New panels inside and out, the fibreglass front and back ends repaired, most of the windows back in and the first coats of paint applied. It can't be long now, surely.

But it is easy to forget that a coach is a small hotel. It contains lots of gadgets, has lots of noticeable details and everything needs to look the part. A lot of the original trim that seemed quite acceptable on a tatty white coach now revealed itself as being far from perfect.

And I should make it clear that the labour rate I was paying had been discounted only on condition that commercial work was prioritised - so there were long periods when nothing was happening then bursts of having to fork out for four or five blokes for a whole week.

So in fact this final chapter covers the longest period but has the least to say. I visited occasionally, sometimes just for photos; other times to take over parts sourced from magazines, eBay and so on but mainly it was just a waiting game.

Two of our biggest triumphs in terms of original parts were the Leyland hub caps and the Supreme V rear lights. The former were advertised in a magazine while the latter were found by my long-suffering wife Rosie and bought on an eBay auction.

Finally, I got a call to come and have a look over and make some decisions. As any preservationist knows, you could go on forever and never get it 100% right. But for the umpteenth time I had to remind myself that I never intended to be a preservationist so I needed to make the impossible decision about what was good enough.

We agreed that the best thing to do was to book an MoT, do as much as possible until that day and leave a week after that either to fix whatever failed it and/or to just carry on gilding the lily. The date was Monday August 10th 2015, one year and nine months after going into the body shop for a two-month, £3,000 re-panel and paint job; and two years and nine months since I bought 'Mary' in the first place.

In the run up to the MoT, having found the official testing guide, I plagued DB Conversions Ltd with texts and emails, basically telling them how to suck eggs. Have they remembered this, did they do that? But at about midday on the day of the test, I received one of those calls that is just a few moments long and whose significance takes a while to sink in. She passed.

But inevitably there was just a little more patience needed. Having agreed to tack the extra week on for any snags, they had sensibly postponed numerous non-MoT items to concentrate on the pass-or-fail bits. So we agreed collection would take place the following Friday, 14th August 2015.

Even on the day, patience was required. Due to a cock-up on the communications front, the team of finishers expected me at 1pm whereas I turned up at 10am. They said I could help with cleaning etc. but I was just getting in the way. So I retired to the local caff and twiddled thumbs for England. However I did make contact with a cleaning company on the business park where my coach would live and they said that if I got there by 5pm, they would let me have the materials to do some cleaning myself.

So it came to pass that at 3.30pm, in the driving seat for the first time in 21 months, I gingerly reversed Mary out of the spray shed and did a quick loop in the yard to get her pointing the right way. What a difference from anything I had driven in the meantime. The nine staff on site all came out and there were cameras everywhere. Wow. Just wow!

I wasn't particularly emotional at that point; but it rose very quickly as I pulled away on my own out of their sight and onto the public road. I knew there was still lots to do but by heck we had really achieved something very special. Still, punching the air and crying like a baby at the same time is not a great recipe for road safety so I zoned back in on the job in hand; get this beautiful beast back home and valeted.

I had already organised a private viewing for the Saturday morning at 10.30 so suffice it to say that Friday evening and early Saturday involved a total of seven hours of hard cleaning; shampoo the seats, scrub and mop the floor, remove thick, thick grime from the inside window rubbers; plus a good wash outside.

But at last, on the stroke of 11am and with a crowd of about 30 family, friends, colleagues, supporters and enthusiasts waiting in anticipation, LFT 5X 'Mary' emerged from her hiding place behind the bushes and did a lap of honour to a standing ovation. That's not something that happens very often for an old bus!

Here's a snap of the moment as the 'Tiger' crosses the 'veld': 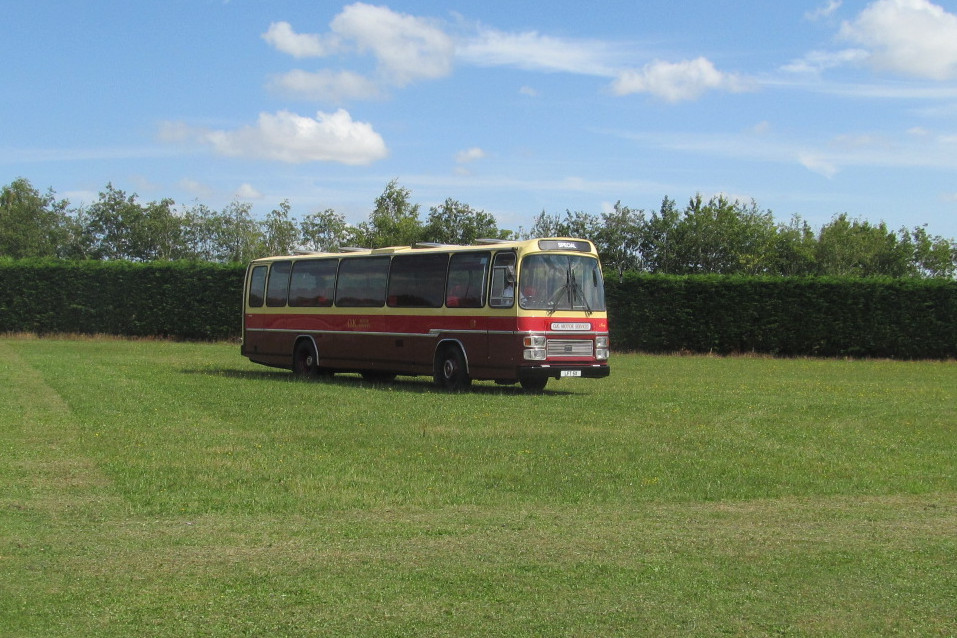 So that's the end of my story. Well not really, of course; Mary may be nicely preserved but she is not 100% restored and probably never will be. But as so many people have said, now I have something to work on. I can plan and predict the next steps.

And in the meantime I, Tim Phillips, can, whenever I like, go out for a drive in my beautiful old bus. And when I do, people will smile, people will wave, some people will even clap or blow a kiss or hold their hands to their mouths; and when I carry passengers, they too will smile and say thank you; not just for the trip, but also for rescuing something very special and very lovely and sharing it with them.

And that, dear reader, will make me the happiest and the luckiest man in the world.